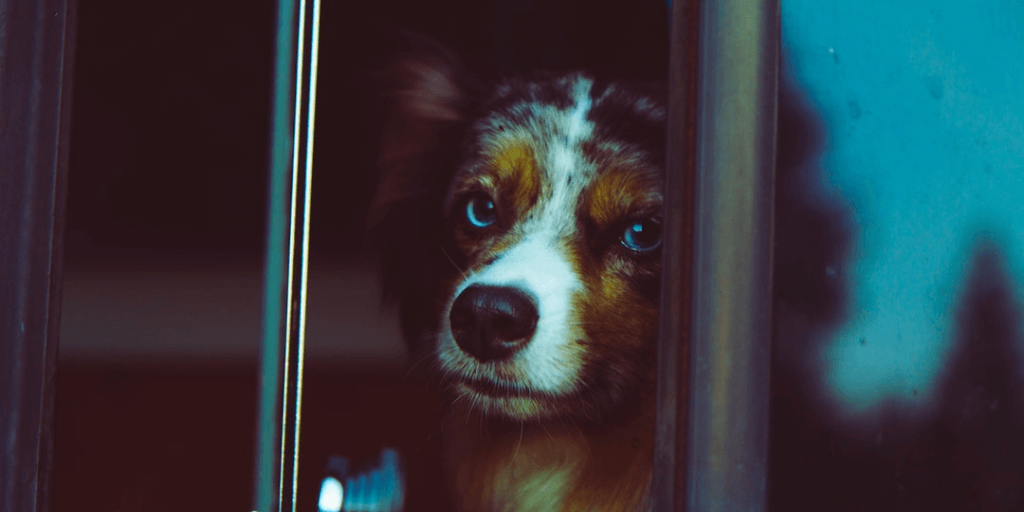 Do you worry about leaving your dog home alone? Perhaps you return to find disemboweled cushions, puddles, and poop on the floor, or maybe the neighbors

complain about constant barking. All of these can be signs your dog struggles to cope when you’re gone. This is distressing for the dog and for you. However, there are things which will help, once your certain anxiety is the problem, rather than boredom.

Here’s the rub: What does your dog do in their first half hour alone?

The dog that immediately starts pacing, whines, scratches at the door, barks, and chews are likely to be suffering from anxiety.

Of course, you’re not there (which is the whole point) to watch so how can you tell? The easy answer is a PetPace collar, which monitors his activity levels, heart, and respiratory rate. So if the dog’s trace shows he settles down for a snooze, only to wake up an hour later and start shredding the soft furnishings, then your best buddy is bored, not anxious. Simple as that!

What is Separation Anxiety in Dogs?

Separation anxiety is a form of neediness or dependency where the dog struggles to cope without his owner by his side. This isn’t necessarily loneliness since the dog may have another four-legged companion and yet still suffer anxiety when away from the owner.

Why do some dogs develop separation anxiety and not others?

Great question. The dog’s life experiences play a part. So a dog that was abandoned in the past or left alone for long periods may go on to develop separation anxiety. But it’s also thought there’s a genetic component, with some being the doggie equivalent of ‘highly strung’ and needing human contact to feel secure than others.

When denied the comforting presence of his owner, an anxious dog becomes a martyr to stress hormones. That racing heart and dry mouth drive him to pace, pant, poop and show other restless behaviors.

Typical signs of separation anxiety include:

What NOT to Do

Let’s say you return home to find the dog has chewed a priceless Chinese rug and soiled all over the couch. Whilst it’s human nature to be upset, you must not vent your frustration on the dog. Instead, go outside and shout at a wall. Then come back in and quietly clean up the mess and chalk it up to experience.

Punishing an already anxious dog only makes the problem worse. He then becomes doubly conflicted because he wants you to come home but is frightened of what happens when you do. In this heightened state of confusion, his separation anxiety is amplified and further damage will result.

Remember, this isn’t a vendetta to destroy your stuff. The dog likely focused his destructive actions on objects that smell of you…because this is comforting to him.

OK, enough of what NOT to do. How do you relieve this crippling anxiety?

When the kids get bored during a long school vacation, they act up.

The same principle applies to dogs. Of course, exercise isn’t a miracle answer for anxiety, but feeling pleasantly tired does help. An exercise is a form of stress relief which can help the dog to cope, and vent nervous energy that might otherwise have been spent on destructive behavior.

Have you ever noticed how problems seem worse at the dead of night? This is because there’s nothing to distract your mind from going over the same old ground again and again.

Give your dog plenty of mental stimulation and this helps refocus attention away from the anticipation of being left alone. Providing this is simple, even basic obedience training makes the dog think (and feels more secure.) Other strategies include using puzzle feeders and distracting the dog with a chew toy when you leave home.

Some dogs are so needy they tag on your heels like a shadow. Rather than indulge this need, try to gently realign his expectations to not expect to accompany you everywhere. When he learns to be at ease in his own company when you’re home, it makes life easier when you leave.

To do this build moment of separation into the day and then gradually extend them. For example, put a child gate across the kitchen door so the dog can see you but not 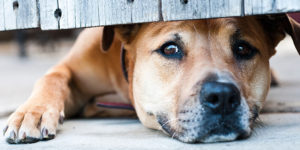 physically is in the same room. Ignore him if he cries, but praise him when he’s quiet.

Practice “Sit” and “Stay”; briefly step out of eye line and return to praise his stay. Gradually increase the time you spend out of his sight until you can leave for several minutes without him crying. Then work on going upstairs or even briefly out of the house, before returning to reward his calm behavior. This builds his confidence as he learns the world doesn’t end and you always come back.

Never underestimate the power of basic obedience training to reassure the dog that all’s well with the world. When you take a firm but fair approach, it’s tremendously reassuring for the dog that lifts a burden of worry from his shoulders. Plus, it teaches the dog to listen and obey your commands.

#5: Shake Up the Leaving Routine

Think about the last time you went to the dentist. The chances are you weren’t looking forward to the appointment and got up that morning with a cloud over your head. Then feelings of unease built on the journey, with a faint whiff of fear as you entered the waiting room.

These feelings are real and physiological thanks to the release of stress hormones such as cortisol and adrenaline. When your dog recognizes signs you are going out, his body releases those same hormones.

The trick is to mix up your leaving routine so your dog’s stress hormones aren’t triggered and he remains calm. For example:

By teaching the dog you always come back, his anxiety starts to dissipate. Leave the house for a few seconds at first, then return. Ignore him at first, again to keep things 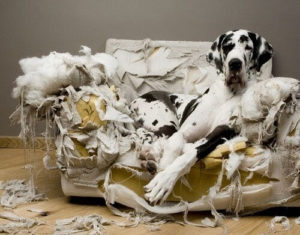 low key. And don’t comfort him if he’s barking or pacing (this rewards the anxiety and will strengthen it.)

Whilst retraining the dog you may wish to hire a dog sitter, or someone to stay with the dog whilst you go to work.

Make the home more reassuring when you’re out.

And finally, part of the dog’s anxiety is he’s intensely bonded to you. This isn’t healthy. Do him a favor by gently expanding his relationships with other people, so he’s less dependent on you.

Simple things are all that’s needed, such as having someone else feed, walk, or play with the dog. That way, his world gets a little bit bigger and so he doesn’t feel your loss quite so intensely.

And finally, separation anxiety is a real and distressing condition. Consider consulting a certified animal behaviorist if your dog has severe separation issues. Together you can work out a plan to put the problem right.